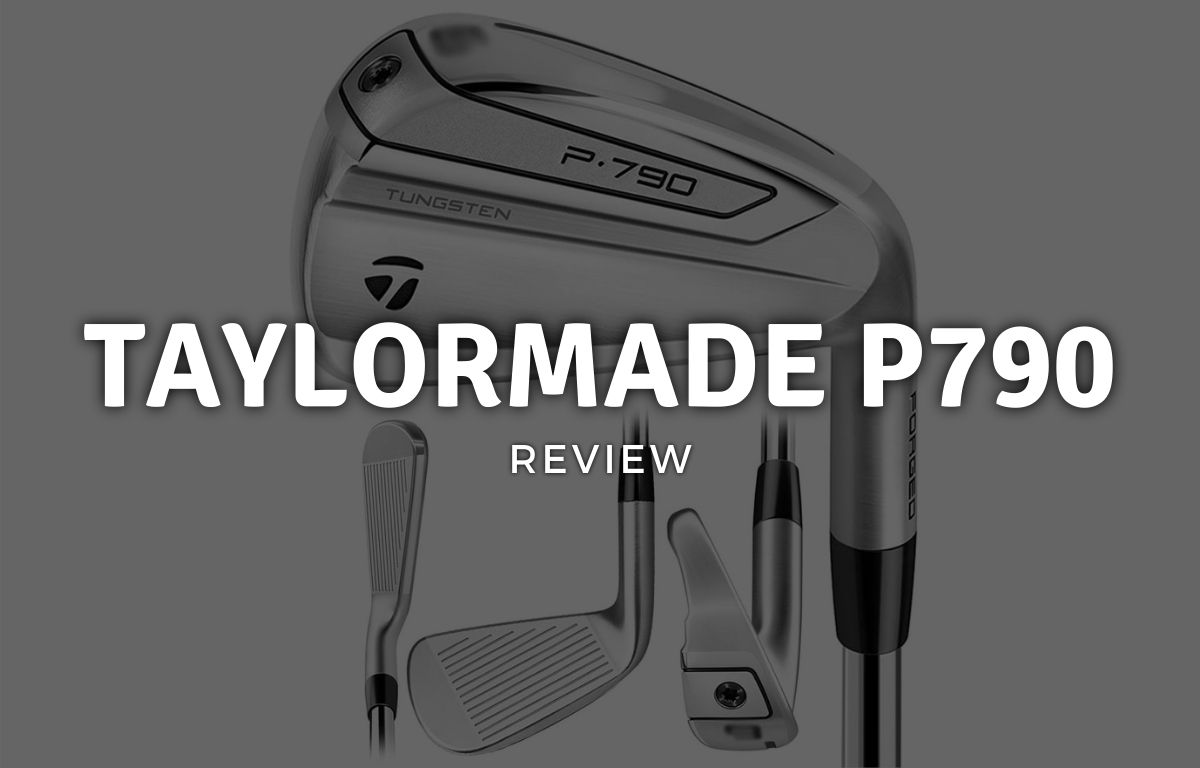 If your looking to get your handicap down a few points, having the right golf iron, such as the TaylorMade P790, is essential.

Irons are often the last thing (if at all) that gets replaced when upgrading your equipment, and a lot of would-be-pro golfers may be standing in the way of their own game improvement by not investing in a solid set of irons.

How did we test the TaylorMade P790 irons?

At Golfing Eagle, we’re all about providing useful and qualitative information about the best clubs that golfers can use to decrease their handicap and get ever closer to hitting a birdie or par.

To ensure that TaylorMade P790 irons are worth promoting, we’ve run extensive first-hand tests, which are then cross-referenced with multiple customer ratings and experiences.

That way, our readers can know that everything we say has been verified by both first and second-hand sources who really know what separates a decent gold glub from a great one.

Closely based on the previous P790 iron, the 2019-2020 version has retained all that TaylorMade is renowned for, as well as adding some new features which can massively improve both the accuracy and distance of your swing.

The first thing to note about the upgraded 2019 P790 is that its name is the same as its predecessor, with the only immediately apparent changes (in an aesthetic sense) being the removal of the full ‘TaylorMade’ engraving on the club – in favor of the smaller TaylorMade logo.

The sole of the upgraded 2019 P790 now features a polished chrome plating, and the top line is a fraction slimmer, which gives these already classy-looking irons an even more professional profile.

Functionally the improved P790 aims to provide a more refined launch characteristic and reduce your gapping between clubs.

As the previous P790 was TaylorMade’s best-selling iron, we decided to test these claims first-hand – the results of which are detailed below.

Let’s take a look into what really sets the TaylorMade P790 irons apart from the rest. TaylorMade is one of the most popular equipment manufacturers on the PGA Tour and that’s no lucky coincidence.

The success comes from the amount of time, money, and research they invest into all their equipment. The TaylorMade P790 irons are no different, as the clubs possess some of the most advanced technology ever to be built into an iron.

TaylorMade’s motto is “you don’t mess with what works… you work to make it better” and that’s what they’ve done with this year’s P790 Model.

Let’s take a look at what’s built into these forged irons.

The first bit of tech which is arguably the most crucial is the forged hollow construction. In order to integrate all the newest technologies, the engineers need room to do so…

The manufacturing process behind the forged hollow body technology isn’t a simple process, and it’s not as straightforward as just removing the core of the club…

The irons need to retain their core properties which made them so popular in the first case. The forged hollow body construction consists of a thin 4140 forged steep face a soft carbon body and 46g of tungsten weighting. These all combined are what make up the body construction, and give the TaylorMade P790 irons their explosive range and forgiveness.

One of the new features in the 2021 P790 irons is TaylorMade’s patented SpeedFoam™ technology.

Speedfoam is an ultra-light urethane foam that engineers inject into the head of the iron.

The foam softens the strike giving users more feel over every shot yet still keeps ball speeds high ensuring no distance is lost in exchange for the increased feel.

The new TaylorMade P790 irons have a low profile tungsten weight in the bottom of the clubhead.

The weight lowers the center of gravity which enables higher launch on all shots.

Typically one of the biggest flaws in a golf club is the inconsistency in range on off-center hits. Therefore, the lower center of gravity and consequently higher launch is what makes the club so user-friendly and easy to use.

Remember…The secret to good golf is not hitting the ball as far as you can but more the distance you’re trying to hit it.

One of the most notable features of the TaylorMade P790 irons is the inverted cone technology.

The inverted cone technology is all to do with the thickness of the material in the head of the golf club. Whereas most golf club manufacturers use a consistent thickness across the face of the club TaylorMade has taken a different approach.

The variance in thickness enables TaylorMade to have a thinner face compared to other manufactures. The thinner center and thicker outer core of the iron have resulted in a much larger sweet spot of the iron.

The sweet spot of the golf club is the part of the club where the ball comes off “Hottest”. The faster the ball speed across the face the less variability in distance, meaning you can attack flags and be confident that even if you don’t find the middle of the face the ball will still travel the correct length and carry onto the green than to the consistence ball speed numbers across the clubface.

A very important feature of a golf club is its feel and sound. Some players, myself included, can be put off by a club which doesn’t sound quite right.

Many want a club that sounds expensive and not one that just looks expensive.

A key feature of TaylorMade is the acoustic which their equipment provides. The best way to describe the noise of a well-struck shot with a TaylorMade P790 is a “thud” and not a “tinny” noise.

When a club sounds “tinny” and “hollow” it can put golfers off. You can tell the quality of equipment players use by the noise their club makes post-impact.

Next time you’re at the golf club have a listen to golfers’ tee shots and see if you can tell the difference between a £500 driver and a $150 one.

The feel of a golf club is just as important as the sound. Better golfers among us will know, a club needs to feel consistent and not just sound consistent.

What do I mean by this? Well, when a golf club has a similar feel for each shot, it helps golfers visualize what the ball will do in the air.

When professional golfers hit great shots they tend to talk through the shot with their caddy first.

One of the main reasons they are able to do so is because they can visualize how the ball will react off the clubface.

When a club has varying sounds and feedback it can make visualization very difficult and consequently it can affect your play.

One of the main benefits of the TaylorMade P790 irons is their expensive accusative and consistent soft feel.

Distance is something that many golfers dream of increasing. Everyone is talking about how far they can hit the ball and ways they can increase distance.

A lot of golfers have companies like TaylorMade to thank for their increase in distance and this is due to the ball speed.

Ball speed for those unaware is the velocity at which the ball comes off the clubface during impact.

When professional golfers work on increasing their range, they don’t focus on swing speed but more ball speed as it is a better indication of distance.

TaylorMade has pushed their equipment to the ball speed limits and has even had to dial them back in order to make them legal for use in competitive golf.

Any golfer which uses the new TaylorMade P790 irons will most definitely see an increase in distance.

This is due to all the PGA Tour TaylorMade Staff players seeing ball speed gains when using the 2019 P790 irons.

Whether it be small or large, the game improvement technology integrated into these long irons will change your game.

The carbon steel shaft included in the TaylorMade P790 irons are True Temper Dynamic Gold Players shafts which are renowned for their forgives and durability.

The clubs are available in both stiff flex or regular flex and weigh 103g /101g depending on the flex you choose.

No matter your handicap, these shafts are ideal for all levels of players.

The technology integrated into these irons is of the highest caliber. TaylorMade is world-renowned for its R&D and this is only highlighted through the P790 irons.

The low COG in the P790 irons is what makes them so easy to hit. Whether you’re a low or high handicap you will definitely see the benefits of including these clubs into your bag.

The technology as previously mentioned in these clubs has made them ridiculously forgiving and easy to play.

The P790 2021 model has a thin top-line which makes them very beautiful to look down at and the spin these clubs produce makes them super consistent.

The speed pocket included in these P790 irons allows for ridiculous speeds which equate to more distance throughout the bag.

When it comes to golf equipment, you ultimately get what you pay for. That’s the reality of the situation. However, that being said, these clubs are as good as they come and will last a long time before becoming obsolete.

The P790 irons by TaylorMade are a fantastic set of golf clubs. They are ridiculously forgiving and very easy to use. ANy golfer no matter the handicap will benefit from using these clubs as their forgiveness is noticeable. They sound great and are possibly the longest distance players iron I’ve personally ever tested.

Are the TaylorMade P790 clubs forgiving?

When it comes to forgiveness any TaylorMade irons, the P790 included will be as forgiving as golf clubs can be.

When buying golf clubs the elite manufactures have all stretched the legal limits to provide the most user-friendly clubs possible and you really can’t go wrong when choosing the new P790s.

Can high handicappers use the P790 irons?

Any TaylorMade P790 irons review will tell you that a higher handicapper may be better suited to a TaylorMade game improvement iron.

Golf is so difficult and golfers need all the help they can get. Therefore despite these clubs being fantastic and as good as they come, there are iron sets out there that are easier to get airborne for golfers who struggle.

However, any player, no matter the level will still be able to use these irons if they want to have a bag full of blades!

Who are the TaylorMade P790 irons for?

In all honesty, the TaylorMade P790 irons were designed with the better golfer in mind.

This is because bladed irons have a low spin on miss-stikes and are less forgiving than game improvement irons.

That being said, blades offer a superior feel and tone, therefore it’s about how much a golfer is willing to sacrifice in exchange for help.