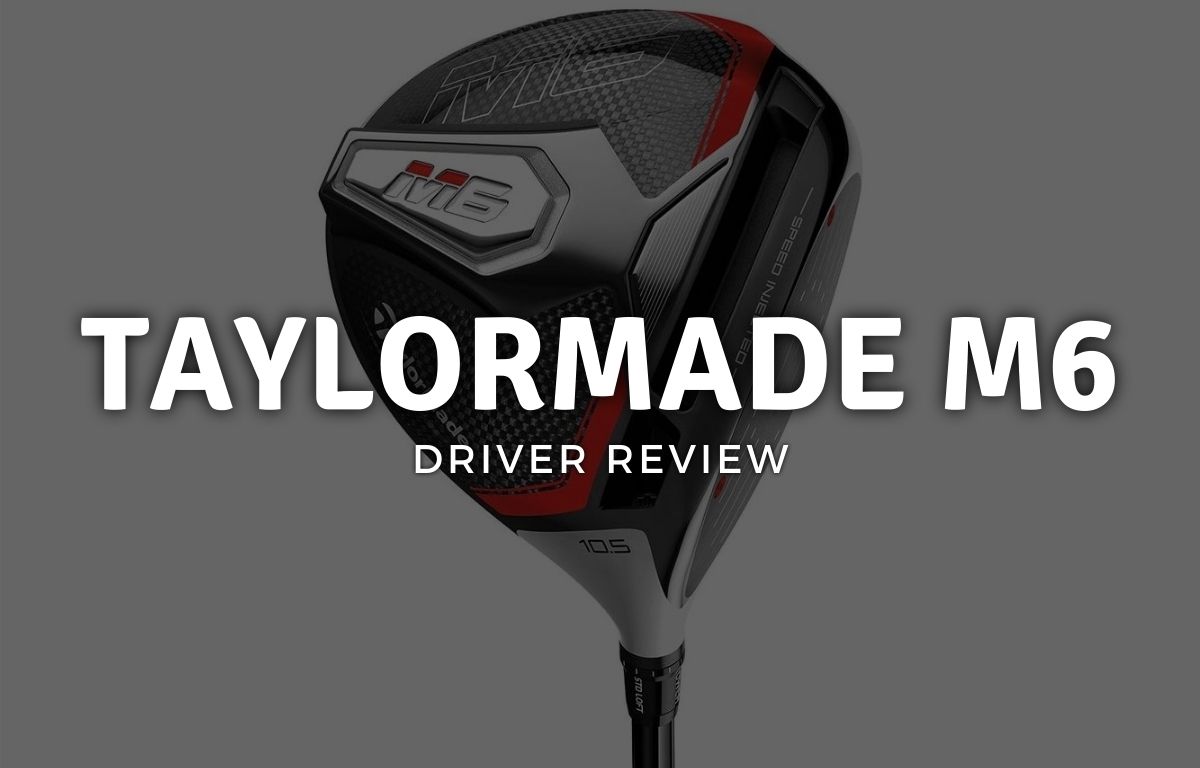 TaylorMade is one of the most well-known and well-respected names in golf. They offer a range of different clubs that will suit anyone, from a beginner to tour players. Even professionals like Dustin Johnson have been known to use this TaylorMade M6 driver at some of the biggest events in golf!

In this TaylorMade M6 driver review, you’ll get a detailed evaluation of the club; reviewing its shaft, feel, performance, and much more.

How did we test the TaylorMade M6 driver?

Thanks to its inclusion of an “inertia generator”, we found this club to be extremely forgiving – and as such an excellent choice for beginners. It’s also no slouch when it comes to speed; thanks to the resin-injected clubface, you’re also able to get great range.

The TaylorMade M6 driver is designed to give golfers more accuracy and distance than any other driver. TaylorMade has utilized cutting-edge technology that aims to push the club to its legal limit.

The TaylorMade M6 driver has many of the same features that were present in the TaylorMade M5 driver, with a key difference. It retains the “Hammerhead 2.0” technology which has been made more flexible than in the previous edition. A new addition is the “inertia generator”. TaylorMade claims that this will give golfers a “speed injection”, allowing you to control your ball speed better.

The stock shaft is the Fujikura Atmos orange. This shaft gives you the opportunity for added flexibility. These differences are mainly around the weight of the shaft. There are also a number of shaft options such as the Atmos black and much more. This means your swing speed and distance on your shots will differ depending on the shaft that is chosen.

Every purchase of an M6 driver comes with a headcover that will allow you to protect your driver, allowing you to use it for a longer time and give you better value for money.

It can be purchased with a 9, 10.5, or 12-degree loft. This means that you can buy a driver that suits you and your game.

The TaylorMade M6 Driver has a very strong look at first glance. The sleek black design makes it a very aesthetically pleasing piece of equipment.

As mentioned, the TaylorMade M6 Driver has been pushed to its “legal limit”. Part of this includes the “Speed Injected Twist Face”. This means that the driver has been “strategically injected” with a resin.

TaylorMade uses this technology to optimize performance and your game. For instance, this feature increases speed through the ball, which in turn gives you greater distance off the tee.

Forgiveness is one of the key selling points of this TaylorMade M6 Driver. The M6 has the previously mentioned “Speed Injected Twist Face”, which, as well as altering distance, has a major impact on forgiveness.

This feature, alongside the lack of weights, means that this driver is easy to hit and gives you great forgiveness no matter where on the face you make contact with the ball. This means that you will get great contact whether you hit the ball low or high on the face.

Another feature that helps with forgiveness is the “inertia generator”. This results in more weight in the low and back of the clubhead, meaning that players will get more forgiveness in their shots.

In summary, this is one of the most forgiving drivers that can be found on the market, making it perfect for someone just starting to play the game of golf.

This TaylorMade driver has a sleek black and silver design. The injected portion of the club gives it a stylish look.

As well as the aesthetics of the club, the design also contributes to its performance. The face and head of the driver have an aerodynamic shape which allows for greater ball speed.

It has over 50% more carbon material than the previous TaylorMade driver that is most like the M6, the M4. This increases the speed of your swing through the ball.

There is little that can be adjusted in this driver. Its lack of adjustability means that it may not suit someone who is trying to finetune their game. It may be more suitable for someone who is just starting and is trying out new clubs.

With this club, you can adjust the sleeve and ball flight control, although you will need another implement to do so.

The shaft and the loft of your driver can vary but can’t be changed after you make your purchase. You have a number of shaft options. The default shaft for this club is a Fujikura Atmos Orange. Your club loft is either 9, 10.5, or 12 degrees. This can affect the spin or distance of the ball after contact.

As the speed of clubhead for this driver is increased. this may mean that your shots will have a higher trajectory.

Speed Injected Twist Face is the latest of the new technologies from TaylorMade which allows them to try and push the maximum legal limits of what can be done with golf clubs. This combines two of TaylorMade’s latest features.

TaylorMade drivers are now injected with a resin that aims to optimize the COR (Coefficient of Restitution) in the face of the club. TaylorMade claims that this will improve the game of the golfers who use it. They say that this speed injection technique will allow golfers to increase ball speed and hit longer shots.

The other technique that is used is Twist Face. This is all to do with the face angle. This is intended to make sure that your shot will reduce spin and give you straight shots. This gives you a more dependable spin even if you strike the golfball a little too low or high on the face.

Another of the key features that are used for these drivers is the inertia generator. Along with an “Aerodynamic Carbon Sole”, this means that more carbon is in the M6 Driver than the previous TaylorMade drivers.

Because it decreases the weight of the head, this ultimately results in more speed generated through the head. This is designed to allow golfers to get even more distance from their shots.

The inertia generator stores around 45g of weight low and back in the head. This is designed to give you as much forgiveness in your shots as possible, giving new players a great feel for the club.

The Hammerhead slot works alongside the “Speed Injected Twist Face”, giving the M6 driver a larger margin for error and a larger sweet spot. This will mean that your speeds aren’t affected by a poor shot.

The M6 driver is a great option for anyone looking to improve their golf game with a new driver. It will give players a great deal of forgiveness and a lot of launch. These positives are mainly due to the number of technological advances made by TaylorMade.

They claim that they have pushed the limit of golf norms to help you improve your swing and your game – and it’s hard to disagree. The resin injected into the clubface and modifications made to the face angle give you a massive amount of control.

Is the TaylorMade M6 forgiving?

Yes, very much so. TaylorMade has incorporated several technical innovations – the result of which is that this driver is extremely forgiving. The “inertia generator” means that even a mis-hit should end in a good shot, no matter where on the face the ball is hit.

Who should use the TaylorMade M6 driver?

It can be used by anyone, although some of its strengths may make it better for players who are new to the game of golf. The lack of adjustability means that some more experienced players wouldn’t want to use it. This is because some more experienced golfers may want to adjust their clubs to their particular needs.

Is the M6 a good driver?

For a driver that gives you better draw bias, then you could look at a TaylorMade M6 D type driver.

Is the TaylorMade M6 better than the M4 driver?

While both of the drivers have similar features, the key difference between them is the new Speed Injected technology. This is where the club is injected with a resin that improves performance. This technology is designed to give a golfer more distance and greater ball speed.

You can also get more shaft options with the M6. If you are looking for a driver that is going to give you a great amount of distance and forgiveness, then the M6 is the better option.